By Selina May 15, 2015
On Saturday 9th May I attended the first Applied Comics Network event to talk about the PhD sessions I offer on 'Communicating your research as a comic strip'. 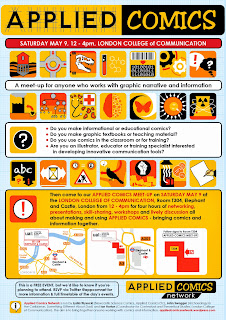 The event was looking at the use of comics for informational and educational purposes. Attendees included academics, PhD students, graphic facilitators and comic creators.

They started the event off (before & after the interruption of a fire alarm!) by looking at the different types of comics the network might cover. They had all come up with different categories but they included:
Next we all had a go at making a quick comic strip based on a random Wikipedia page - yes, even those of us who can only draw stick figures! Then in small groups we discussed what we'd created and any issues it raised. 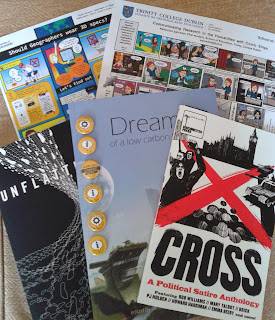 Popular posts from this blog

You can now export multiple citations from Google Scholar

By Selina December 01, 2017
You can now export multiple citations from Google Scholar if you have a Google Account. Go to Google Scholar and sign into your Google Account. Conduct your search. Click on the Star icon (Save) under each reference you want to export. Then click on My Library in the top, right of the screen. Select all the references and click on the Export option: Click the Star/Save Icon Choose Export Option To Export into EndNote Choose the EndNote option. Open the EndNote file that is created. The references should automatically import into EndNote. To Export into RefWorks Choose the RefMan option. Save the RIS file that is created. Login to your RefWorks account. Click on the plus (+) button. Choose Import References. Add the RIS file you just saved. Set the file import option to RIS - Reference Manager. Click import and your references will be imported. --- Good Practice Tip: Always check that all the reference information you need has been
Read more

By Selina December 06, 2013
EndNote X7, which is available on University computers, now has a toolbar for inserting citations and references into PowerPoint. EndNote X7 Toolbar in PowerPoint 1)    Open up PowerPoint and place your cursor where you wish to insert a citation or a reference. 2)    Click on the EndNote X7 tab. 3)    Choose the reference style you want to use from the drop-down menu. 4)    Click Insert Citation or Insert Reference 5)    Search for the reference you want or search on * to bring up a list of all your references. 6)    Click on Insert. You will need to insert the citation and the references separately as this is not a Cite While You Write toolbar like the one in Word. Example of a citation and a reference inserted using the toolbar and the Harvard style.
Read more

Searching the fulltext of PDFs in EndNote

By Selina August 21, 2015
Did you know that you can search across the full text of PDF articles within EndNote desktop? First get the PDFs into EndNote: - Import references from literature databases. - Use the 'Find Full Text' feature. - Set-up the 'OpenURL Link' Feature. Choose the references you wish to search and set the search field to PDF:     There are some limitations to the full text search: - Needs human intervention – search within PDFs found to see context of keyword (e.g. using Ctrl + F) - Some elements in the PDF (e.g. legends underneath graphics) may not be searchable. You can see how we used these techniques as part of a text mining project: Unlocking REF2014: Text mining to show your impact: Watch the recording .
Read more